by Mitch Robertson
Click here to go to straight to the pictures at the bottom of this page.
See Zawinul's listing on the General Details of Installations page.

I started working on stuff for Joe Zawinul around 1990. He was a longtime client of David Kulka's. At a point in time David slowed down on the amount of service calls he made. He would sometimes send me out on certain jobs and one of those jobs was to Joe Zawinul's studio at Joe's home in Malibu. Zawinul had an old Amek board. I can't even remember the model number. He also had (and still has) an Ampex 1200. I used to work on those and Joe's Roland Keyboard mixer and other stuff that Ivan (Joe's son who does all of Joe's engineering) would give me. I started hanging with Ivan and became friendly enough with the family to receive social invitations out to their home including to a couple of new year's eve parties!

One fateful fall day in 1993 I was in Malibu working on that old Amek board. At around 11:30 that morning I went out to the car to get something. On the way back in I looked up and saw the most awesome (hate to use that word) clouds that I have ever seen. They were very thick and looked as though they were an animation or were smoke spewing from the mouth of an active volcano. After looking for a second, I realized that I WAS looking at smoke. The smoke was coming from the backside of the mountains right there at Malibu. This was not long after the fires here in Alta Dena had burned many homes, including a house owned by another client of mine (Ron Yates), so we were all feeling sensitive about wildfires.

At the time, Zawinul was in Europe on tour. The only one home was his wife. I showed her what I saw and we turned on the TV to see if there was any coverage. A fire had indeed started on the back side of the mountains and was blowing towards Malibu. Soon after that the power went out and the police started cruising the neighborhoods and flying over, announcing an evacuation. Joe's wife asked me what she should do. I told her to gather all important papers together while I loaded ALL 2 inch analog tapes out of the studio into my truck. Fortunately I was still driving my old Toyota long bed pickup truck at the time. They had all of the Weather Report 2 inch tapes including a lot of live stuff and were getting ready to put together a Weather Report box set (HEY JOE! Is it out yet???) There were several half inch master mixes but they weren't going to fit on the truck along with everything else so I figured that if we had to decide, then we should save the 24 track tapes because they could be re-mixed. I loaded all the 2 inch tapes, and everything that Joe's wife gave me, including scores from Zawinul's symphony, and a sculpture that was done for Joe by Jaco's brother. While I carried the tapes out I was reading the labeling on the tape boxes. It said things like "best take" and "Jaco's solo" and stuff like that. Seemed kind of priceless to me.

By the time I loaded everything, the fenders on my truck were about a quarter inch away from rubbing on the tires. It was about 2 or 3:00pm at this time. After that we just waited. Joe's wife wasn't going to leave until she absolutely had to. I didn't think that I should go off and leave her alone, so I stayed.

I regretted that we didn't have a photo or video camera. The Zawinul's house was situated about 300 yards above the Pacific Coast Highway (hwy 1). It was incredible. I've never seen that many choppers in the air in my life. Every news helicopter in the southern part of the state was there. I think I counted 29 of them at one point. There were some fire-fighting choppers there that would fly out to sea about a mile or so and pick up a load of water, take it back in and dump it on the fire.

From where we were we could see houses burning. I even saw a couple of fireballs shooting up in the air, looking like some special effects demonstration. As evening approached, the bay in front of Malibu filled up with boats. Everyone wanted a spectacular show. The Pacific Coast Highway was completely backed-up with evacuees, all the way into town.

Then the extra fire-fighting crews started arriving from all over the state. Since there were so many personnel there to work on the fire, they sent crews way out in front of the fire in all directions and had them set up in neighborhoods by pulling hoses into every backyard on the street. I'm certain that this is what saved Zawinul's home (and studio)! There was a fire crew sitting there for about 2 hrs before the fire got so close that we were forced to leave. The fire was, at this point burning in huge fifty foot high walls, down all sides of the mountains, coming our way. When I later compared notes with her, Mrs. Zawinul and I both had the same thought when we saw all of that fire: Dante's Inferno.

We finally left at about an hour after dark. Mrs. Zawinul went to some friends of hers in Santa Monica and I started my long, slow haul back to the San Fernando Valley. Because I was so overloaded I could only drive about 15 mph. I stored the tapes in my garage that night. The next morning a Sony courier came by and picked them up.

Fortunately, Zawinul's house was spared. The fire burned within ten feet of their house. Which means their next door neighbors were not as lucky. I spoke to the man of that house right before he and his family left. It was so sad. I could tell that he was leaving knowing that everything that belonged to him and his family would probably be destroyed. He told me about the beautiful Steinway grand piano his parents had given them that was in the living room. It was all so sad. 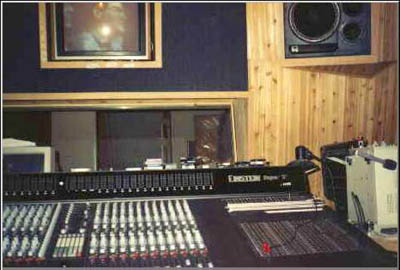 This is a shot from Zawinul's studio in New York City.


Zawinul, Trilok Gurtu and Mitch backstage after a show in Buenos Aires, Argentina. 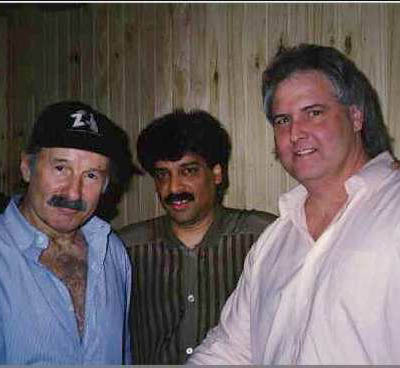